You are here: Home1 / Blog2 / History3 / Robert Burns And The MacFarlane Homelands

Local Burns lovers have always delighted in relating the tale of Rabbie’s journey through the district, when he was made freeman of Dumbarton and received his Burgess Ticket. I had heard references to his night on Loch Lomondside and his ill-fated race with a local “Highlandman” down the lochside on his horse, Jenny Geddes.

I often wondered how much truth there was in this story. I then read the actual letter he had written to one of his old friends, James Smith, recounting the story. It seems that we made Rabbie very welcome – perhaps a wee bit too welcome! The Bonnie Bank of Loch Lomand

In this first letter he had just left the then new town of Inveraray and stopped off at Arrochar. He had not been enamoured by his highland hosts so far and it was in the inn at Inveraray (probably now the Argyll hotel) that he scratched on a window the following lines …

WHOE’ER he be that sojourns here,
I pity much his case,
Unless he comes to wait upon
The Lord their God, His Grace.

There’s naething here but Highland pride,
And Highland scab and hunger:
If Providence has sent me here,
‘Twas surely in his anger.

If it’s any consolation to our friends over in Inveraray, the above verses were written after he had been rejected as a guest of the Duke of Argyll at the recently built Inveraray Castle. The town and its castle were both quite new and possibly even futuristic for that time. Burns would normally have been quite impressed but on the day he arrived the Duke (as president) was busy hosting a meeting of the British Fishery Society so there was no room for Burns at the castle and he was turned away. His acerbic lines were probably greatly influenced by this event. Things clearly improved from that point as illustrated in his next letters.

To MR. ROBERT AINSLIE. [A young writer in Edinburgh.]

I write this on my tour through a country where savage streams tumble over savage mountains, thinly overspread with savage flocks, which sparingly support as savage inhabitants. My last stage was Inveraray – tomorrow night’s stage Dumbarton. I ought sooner to have answered your kind letter, but you know I am a man of many sins.

So he wrote as he prepared for his visit to Dumbarton to receive his Burgess Ticket. The late James Hempstead of Dumbarton Burns Club wrote an excellent little book called “Robert Burns and Dumbartonshire”. In this he says that the above letter was written from a place called “Crocharibas”, near Arrochar. The name no longer exists so it is not clear exactly where it was but Hempstead says it was where Burns sheltered for the night after leaving Inveraray. He then travelled on via Tarbet to Bannachra/Arden on Loch Lomondside where he stayed the next night before heading on to Dumbarton.

The next letter relates the story of his overnight stay at Bannachra, on the evening of 28th June. Bannachra covers an area at the south end of the parish of Luss and there is some confusion as to where exactly he stayed. Hempstead’s account  draws much from a manuscript written by Dr. George Grierson of Glasgow, who accompanied Burns on this trip. Grierson says he stayed at Bannachra, on the banks of Loch Lomond side near where the River Fruin enters the Loch. This is now within the grounds of the Carrick golf course but the house is no more. According to Grierson his host on that evening was Archibald MacLachlan, the tacksman at Bannachra. Unfortunately Grierson’s original document was lost many years ago.

Note: John Cairney in his book, “On the Trail of Robert Burns” states that Burns stayed at Cameron House, which was the home of the Smollett family. The author Tobias Smollett had already passed on by this time but Burns mentions reading Smollett’s novels in his letters so it is entirely possible that he would have visited Cameron House had he known that this was Smollett’s home. The problem with this is that as an admirer of Smollett and his works had he stayed in Cameron House he would surely have been thrilled enough to mention this in his letters. John Cairney’s version goes on to say that when he left Cameron House he travelled onwards via Luss and Balloch but Cameron House is south of Luss so this part is certainly incorrect.

Update: It is now certain that Burns stayed at Bannachra House, which is a mansion built in the grounds of the old Bannachra Castle. This is on the hill to the left as you turn on to the Helensburgh road at Arden. The image below is of a map of that area in 1777 compared to the present day.

On our return, at a Highland gentleman’s hospitable mansion, [at Bannachra, on Loch Lomond Side] we fell in with a merry party, and danced till the ladies left us, at three in the morning. Our dancing was none of the French or English insipid formal movements; the ladies sung Scotch songs like angels, at intervals; then we flew at Bab at the Bowster, Tullochgorum, Loch Erroch Side, etc., like midges sporting in the mottie sun, or craws prognosticating a storm in a hairst day.

When the dear lasses left us, we ranged the bowl till the good-fellow hour of six; except a few minutes that we went out to pay our devotions to the glorious lamp of day peering over the towering top of Benlomond. We all kneeled; our worthy landlord’s son held the bowl; each man a full glass in his hand; and I, as priest, repeated some rhyming nonsense, like Thomas-a-Rhymer’s prophecies, I suppose. After a small refreshment of the gifts of Somnus, we proceeded to spend the day on Lochlomond, and reached Dumbarton in the evening.

We dined at another good fellow’s house, and, consequently, pushed the bottle; when we went out to mount our horses we found ourselves “No vera fou but gaylie yet.” My two friends and I rode soberly down the Loch side, till by came a Highlandman at the gallop, on a tolerably good horse, but which had never known the ornaments of iron or leather. We scorned to be out-galloped by a Highlandman, so off we started, whip and spur. My companions, though seemingly gaily mounted, fell sadly astern; but my old mare, Jenny Geddes, one of the Rosinante family, she strained past the Highlandman in spite of all his efforts with the hair halter: just as I was passing him, Donald wheeled his horse, as if to cross before me to mar my progress, when down came his horse, and threw his rider’s breekless arse in a clipt hedge; and down came Jenny Geddes over all, and my hardship between her and the Highlandman’s horse.

Jenny Geddes trode over me with such cautious reverence, that matters were not so bad as might well have been expected; so I came off with a few cuts and bruises, and a thorough resolution to be a pattern of sobriety for the future. I have yet fixed on nothing with respect to the serious business of life. I am, just as usual, a rhyming, mason-making, raking, aimless, idle fellow. However, I shall somewhere have a farm soon. I was going to say, a wife too; but that must never be my blessed lot … [here ends the local interest]

From Mossgiel on 7th July, 1787 in a letter to John Richmond, a friend from Edinburgh, Burns included the following … 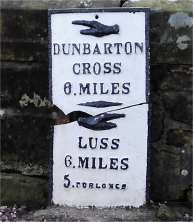 “… I have lately been rambling over by Dumbarton and Inveraray, and running a drunken race on the side of Loch Lomond with a wild Highlandman; his horse, which had never known the ornaments of iron or leather, zigzagged across before my old spavin’d hunter, whose name is Jenny Geddes, and down came the Highlandman, horse and all, and down came Jenny and my bardship; so I have got such a skinful of bruises and wounds, that I shall be at least four weeks before I dare venture on my journey to Edinburgh.”

So there we have it. Rabbie seems to have had a great time on Loch Lomond side, women, all night parties, drunken horse races, cuts and bruises, et al. He did however make it to Dumbarton via Balloch, the Vale of Leven and Renton but one can only guess at his condition when he arrived. I suppose he must have had time to tidy himself up because the town elders made him a freeman of the Burgh.

It is also worth noting that Burns made a reference to the music for “Dumbarton’s Drums” in this next letter. (See right hand column above.) This is an old, traditional Scots song but perhaps Burns first heard it that during the night he spent in Dumbarton the previous June.

TO THE REV. JOHN SKINNER.

I have been a cripple now near three months, though I am getting vastly better, and have been very much hurried beside, or else I would have wrote you sooner. I must beg your pardon for the epistle you sent me appearing in the Magazine. I had given a copy or two to some of my intimate friends, but did not know of the printing of it till the publication of the Magazine. However, as it does great honour to us both, you will forgive it.

The second volume of the songs I mentioned to you in my last is published to-day. I send you a copy, which I beg you will accept as a mark of the veneration I have long had, and shall ever have, for your character, and of the claim I make to your continued acquaintance. Your songs appear in the third volume, with your name in the index; as I assure you, Sir, I have heard your “Tullochgorum,” particularly among our west-country folks, given to many different names, and most commonly to the immortal author of “The Minstrel,” who, indeed, never wrote any thing superior to “Gie’s a sang, Montgomery cried.”

Your brother has promised me your verses to the Marquis of Huntley’s reel, which certainly deserve a place in the collection. My kind host, Mr. Cruikshank, of the High School here, and said to be one of the best Latins in this age, begs me to make you his grateful acknowledgments for the entertainment he has got in a Latin publication of yours, that I borrowed for him from your acquaintance and much-respected friend in this place, the Rev. Dr. Webster.

Mr. Cruikshank maintains that you write the best Latin since Buchanan. I leave Edinburgh to-morrow, but shall return in three weeks. Your song you mentioned in your last, to the tune of “Dumbarton Drums,” and the other, which you say was done by a brother in trade of mine, a ploughman, I shall thank you for a copy of each. I am ever, Reverend Sir, with the most respectful esteem and sincere veneration,

Another local connection to the Bard of which we were unaware was recently brought to our attention.  This is through “The Mauchline Belles” to whom Burns referred in his works. In Burns’ view the Mauchline Belles were the six most attractive women in Mauchline and of course they included Jean Armour.