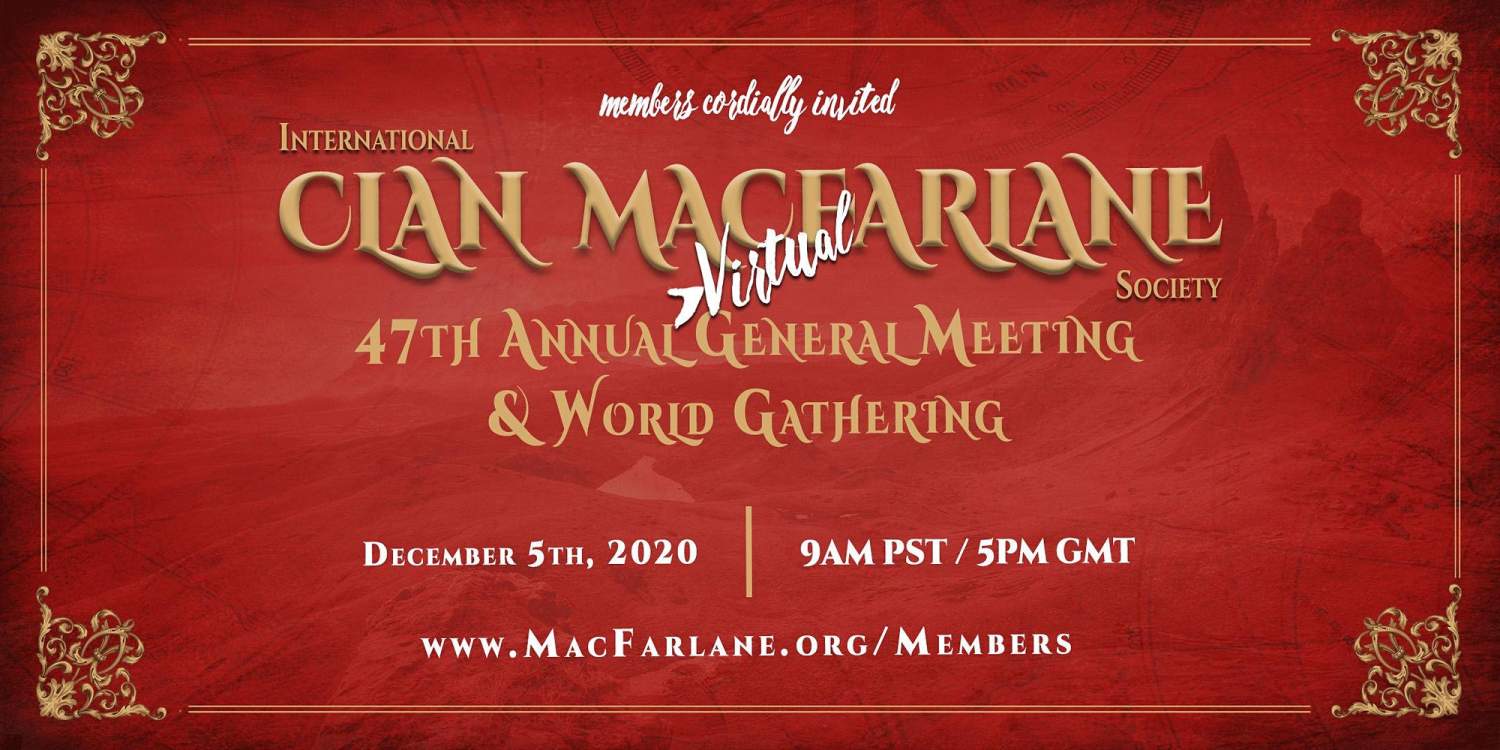 **ACTIVE MEMBERS ONLY** Log in to register.In a time when we cannot all come together, we ask that you join us for this LIVE BROADCAST to celebrate our proud Clan culture and all things Scottish! We will be  featuring special guests and segments that will both inform and entertain. We’re working on some special stuff for you!  Rare documentaries on MacFarlane history, film, interviews, music and more. At 10 am PST, we will pause the show to have a LIVE AGM meeting that will feature our ICMS officers, Commissioners and staff. We invite you to attend the general business meeting where we will discuss our plans for the ICMS AGM Gathering in Scotland in 2022. We will be taking questions LIVE!

For Members Of
The International Clan MacFarlane Society

All Active Clan MacFarlane Members are cordially invited to attend the 47th Annual Clan MacFarlane Virtual General Meeting and World Gathering to be held December 5th @ 9am in the member’s area of MacFarlane.org 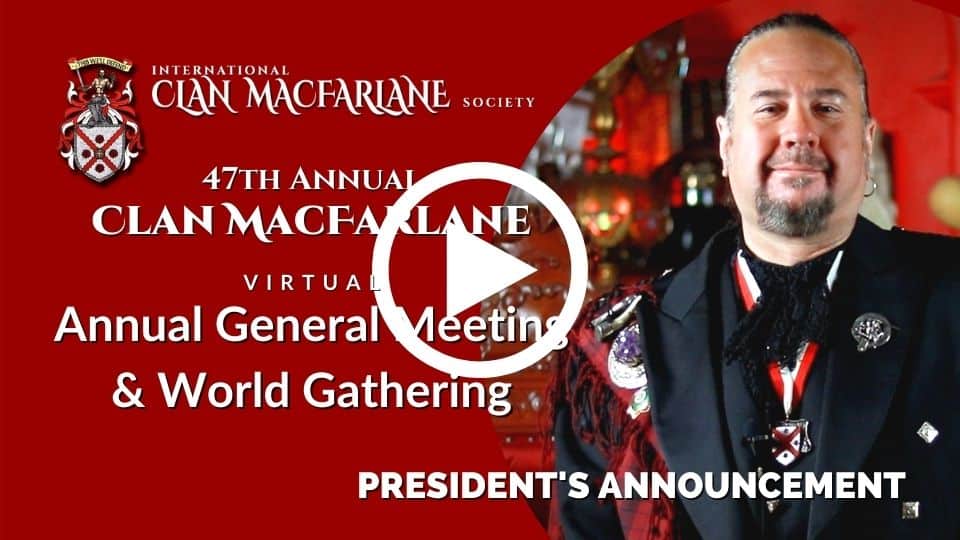 In a time when we cannot all come together, we ask that you join us for this LIVE BROADCAST to celebrate our proud Clan culture and all things Scottish! We will be  featuring special guests and segments that will both inform and entertain. We’re working on some special stuff for you!  Rare documentaries on MacFarlane history, film, interviews, music and more.

At 10 am PST, we will pause the show to have a LIVE AGM meeting that will feature our ICMS officers, Commissioners and staff. We invite you to attend the general business meeting where we will discuss our plans for the ICMS AGM Gathering in Scotland in 2022. We will be taking questions LIVE!

The event is FREE but you will need to register to attend. 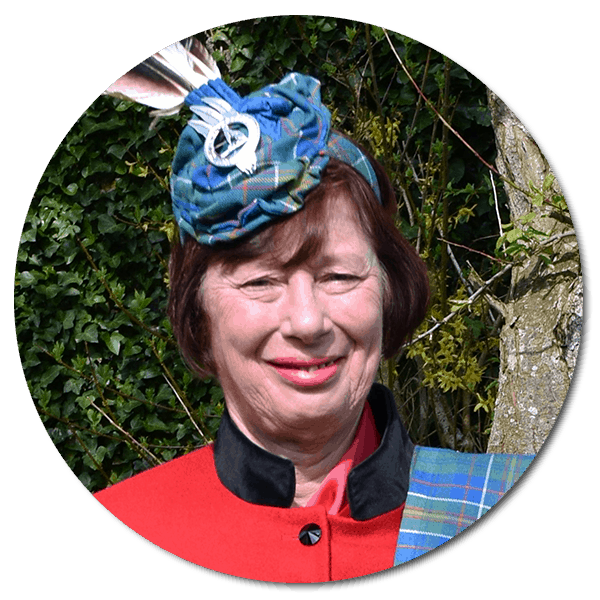 We are honored to have Madame Pauline as our very special guest to speak on perpetuating Scottish heritage, clan conservation efforts and working as a female leader in her community.

A special screening of a rare docu-drama which illustrates the legend depicted in the beautiful song “The Bonnie Bonnie Banks of Loch Lomond”.  Set in beautiful Scotland on the banks of our native homeland, the short-story is a dramatic telling of two lovers separated by war who ultimately find each other in the future through a young woman who illustrates their story through song. 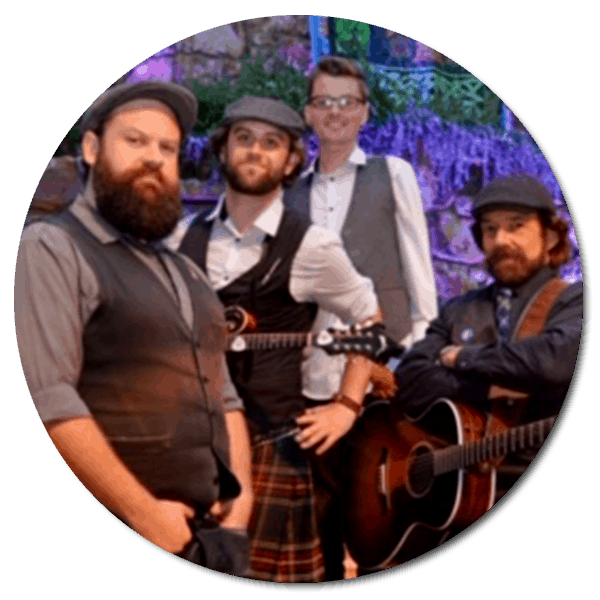 For the better part of two decades, the Ploughboys have regaled the Celtic community with modern and traditional music from the British Isles, with dashes of bluegrass, country, and American folk thrown in. They have been featured internationally at such events as ScotWeek and New York Tartan Week‘s Virtual Tartan Day. 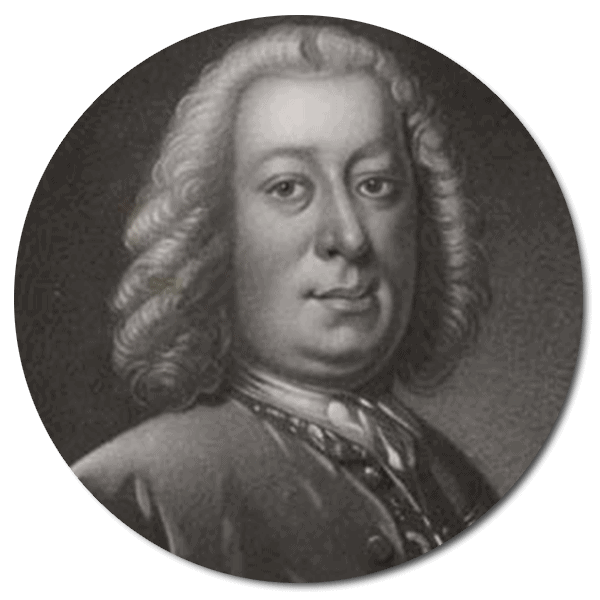 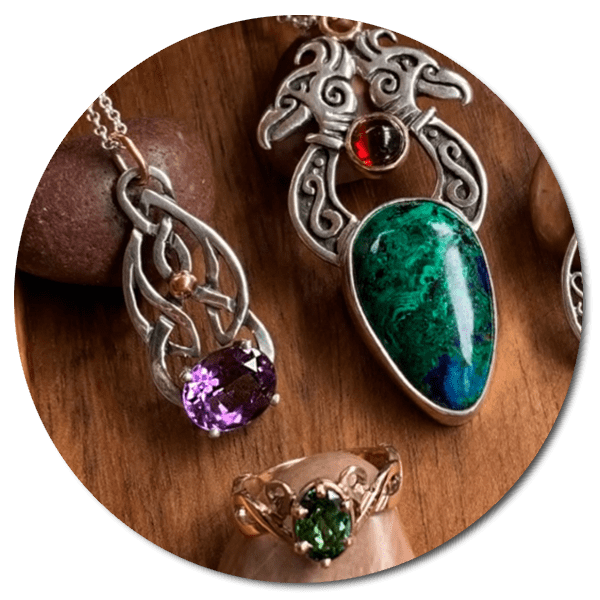 Miss attending Highland Games and other related Scottish events.  Who doesn’t love shopping at festivals to find all your favorite Celtic treasures.  Well, we’ve gathered up a few of our favorite vendors and will be airing special messages featuring their products. 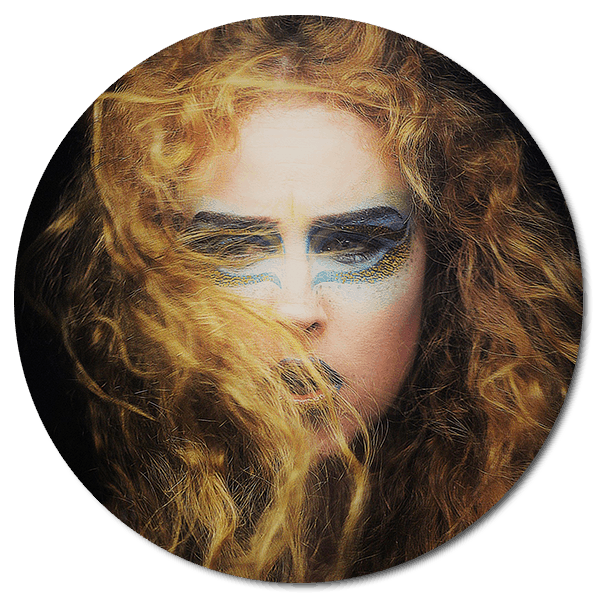 Born with Celtic roots, Ella followed her Scottish and Irish ancestry back to the Highlands and Isles and found her passion for Celtic music and song. Ella is an multi award winning artist with achievements that include “Song of the Year” and “Female Artist of the Year” from the Australian Celtic Music Awards. Having performed all over the world, Ella calls Australia home and has just released her latest single Errigal. 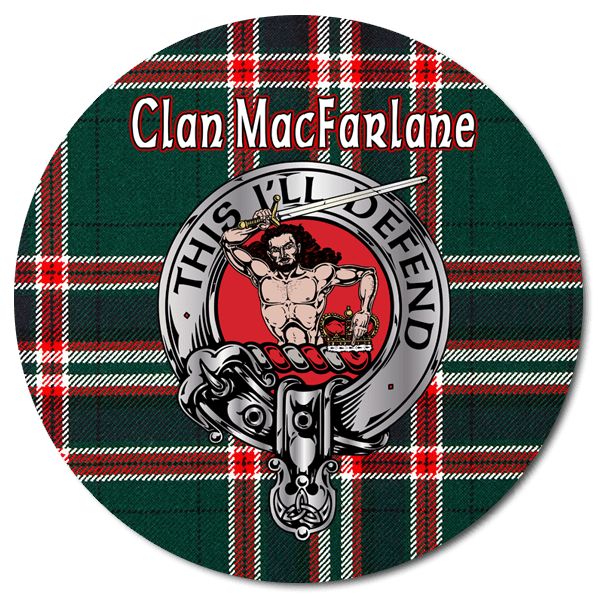 The meeting will begin promptly at 10AM. If time permits, we will be taking your questions live. 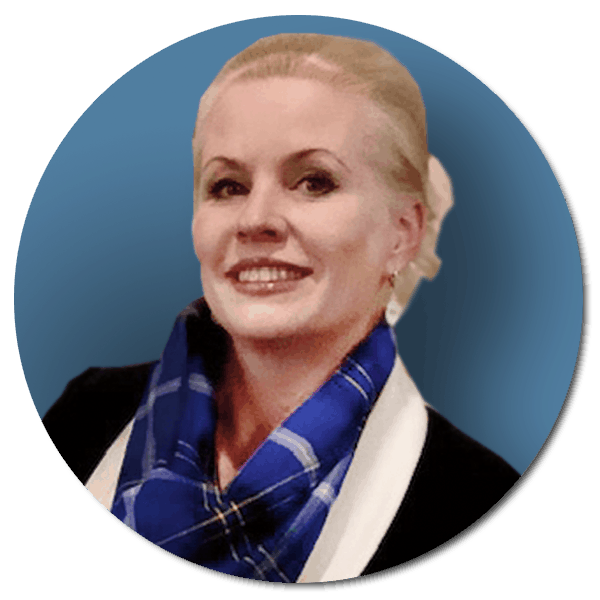 We are honored to have Cindi McIntosh as our Official Clan Piper. She’ll be stopping by to chat about ScotWeek as well as the future of in-person events in North America and Scotland. 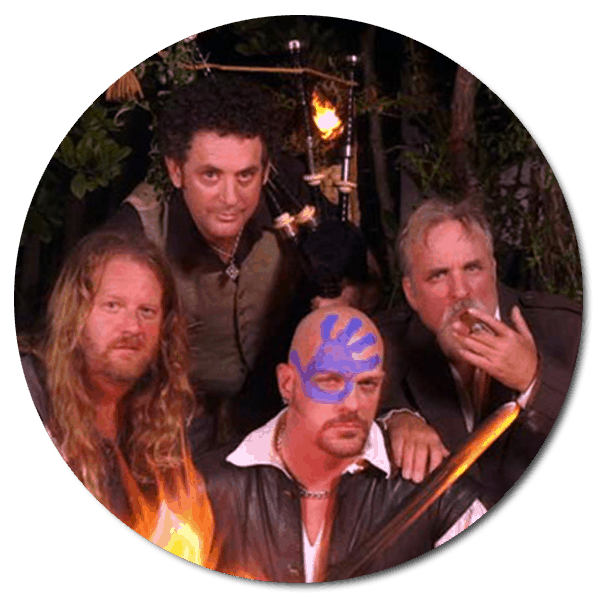 A special video presentation of The Wicked Tinkers rendition of MacFarlane’s Lantern/Thogail nam Bo.  The full moon has long been referred to as, “MacFarlane’s Lantern” in the Highlands of Scotland as the MacFarlanes often used it for a lamp when conducting their cattle raids.  The Wicked Tinkers are proud to be joined on this track by Michael R. MacFarlane, the President of the International Clan Macfarlane Society. 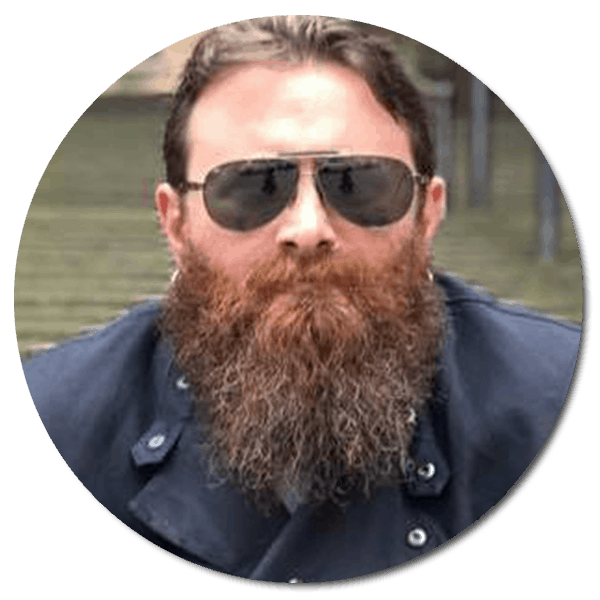 Kyle Dawson is President of the National Tartan Day New York Committee, which hosts New York City Tartan Week every April, and also serves as Treasurer to the New York Caledonian Club. Kyle is an IT professional who has even found the time to become an accomplished bagpiper, recently holding a very special pipe performance for the medical professionals and first responders of New York City at the beginning of the Covid crisis. Kyle’s mission is to help connect the Scottish-American diaspora and continue to make NYC Tartan Week an even bigger and better event for all.

Kyle will be stopping by to chat the discovery of being Scottish, becoming President of NYC Tartan Week and the future of in-person events in North America.

Having received his PhD from the University of Edinburgh, Dr. Simon Gilmour has spent the past 20 years working in the fields of archeological and historical studies. Fascinated by the Iron Age of the Atlantic Seaboard and particularly the brochs of Scotland, Dr. Gilmour  have been a Visiting Fellow of the University Campus Suffolk Business School, an Honorary Secretary and then Vice President of Archaeology Scotland and was a Director and Vice Chair of BEFS, the Built Environment Forum Scotland.

Dr. Gilmour will stop by to tell us about the history of the Society of Antiquaries of Scotland, what it means to be an FSAScot and about what the Society is currently working on. 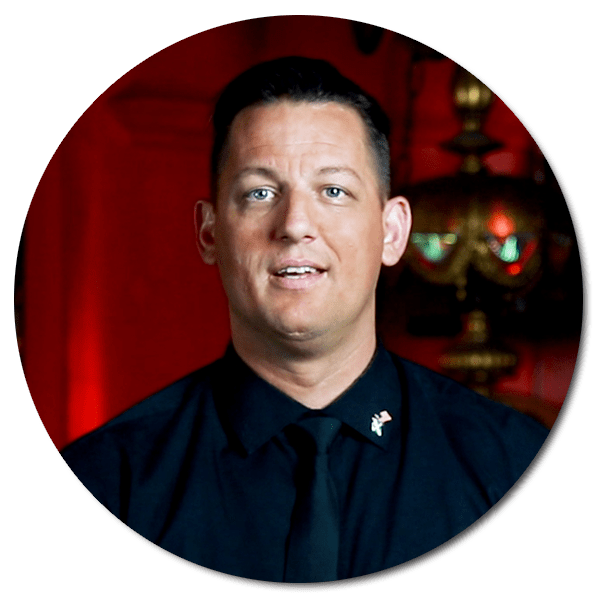 Kendall is a proud member of the International Clan MacFarlane Society.  Kendall’s Scottish heritage is that of Weir, a prominent sept of Clan MacFarlane.  His Scottish grandfather having immigrated to the U.S., Kendall follows in his family’s footsteps of perpetuating their individual Weir history and culture.

Kendall will give a presentation on the Clan MacFarlane septs and talk with President Michael MacFarlane about septs, their significance and how they fit into Scottish history. 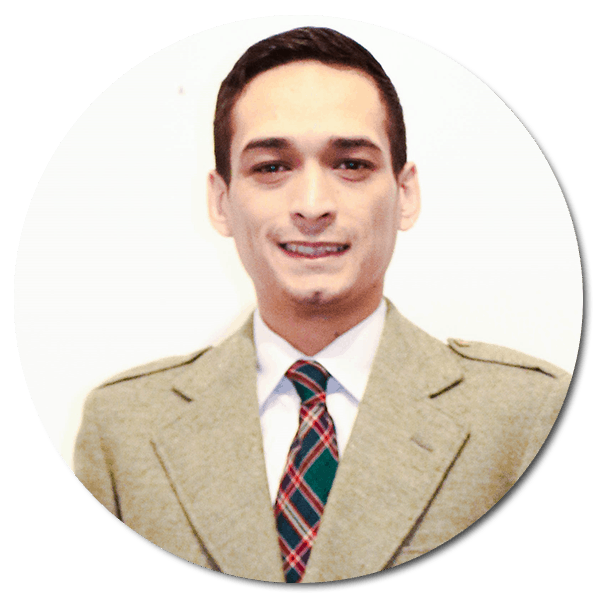 Andrew is the International Clan MacFarlane Commissioner to Scotland and is an accomplished craftsman as the owner of Pharlain & Lennox Scotland, maker of authentic Scottish Highland-wear  accessories. Known for his beautiful custom-made sgian dubhs.

Andrew will be sharing with us a presentation on the tradition of Highland hospitality and the history of the sgian dubh. 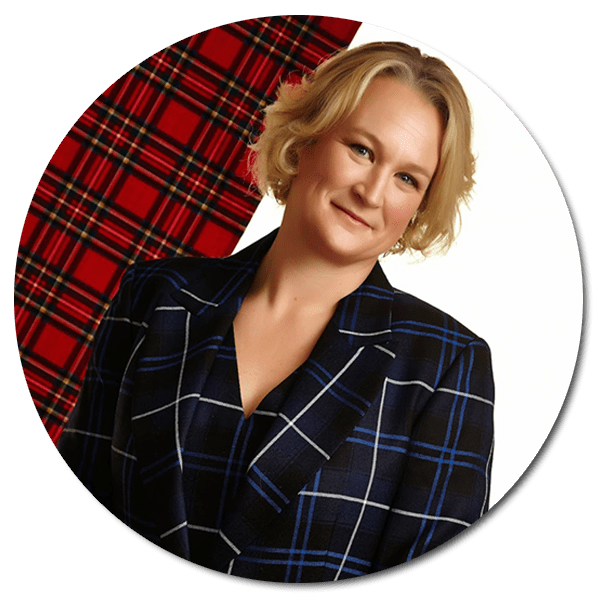 The ScotlandShop collection is inspired and influenced by the multitude of colour to be found in our Scottish tartans, steeped in history yet still a fundamental part of the fashion industry.

Anna will be giving a presentation on the MacFarlane tartans and MacFarlane history. 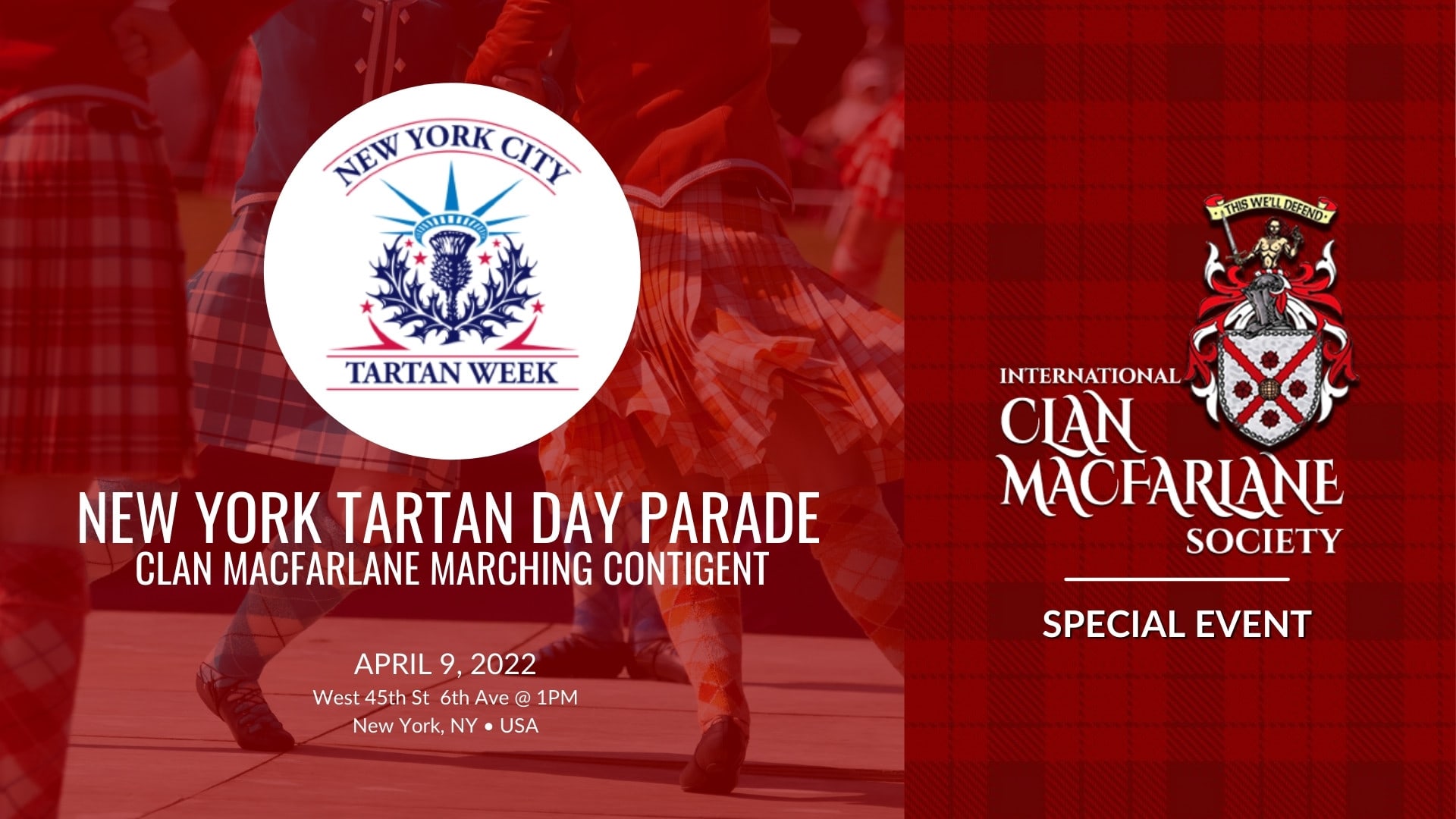