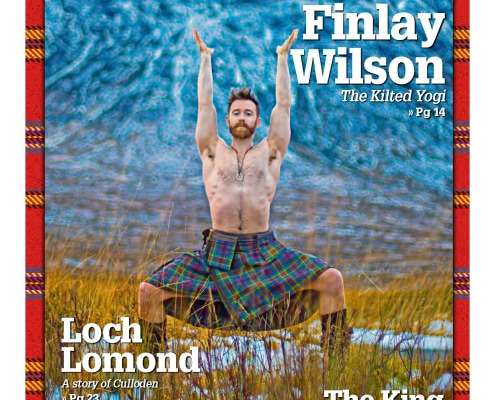 In this issue... LOCH LOMOND: A STORY OF CULLODEN The song Loch Lomond is well-known by Scots. Most of us learnt it as children. The lyrics are not immediately clear; it is a lament bout “me and my true love” but it does not say who they were. The story behind the song is true. “Me and my true love” were Robert King and his wife Janet Kissock who lived in Renfrewshire from 1673 to 1746. They courted in 1698 - 1700 and married in 1700, to be parted by his death 46 years later. FINLAY WILSON: THE KILTED YOGI Viral Scottish yoga star Finlay Wilson is back with his new book Wild Kilted Yoga: Flow and Feel Free, get ready for more tartan, more dramatic scenery and more tips and tricks to make your yoga practice extra special. Finlay took time to speak to the Scottish Banner on his love of yoga, his rescue dog Amaloh, tartan and of course Scotland. THE KING AT PLEASURE AND PRAYER James IV is usually remembered as the tragic king who not only lost the Battle of Flodden in 1513, but also died on the field. In fact, he was a very much more complex and interesting figure who influenced both the world of the church and the world of the arts. One place where these interests came together was Linlithgow Palace.
https://www.macfarlane.org/wp-content/uploads/2022/08/SB-4508-February-22-Cover.jpg 2073 1480 Diana MacFarlane https://www.macfarlane.org/wp-content/uploads/2017/06/header-logo-6.png Diana MacFarlane2022-02-05 13:06:042022-08-05 13:25:07 The Scottish Banner
Feb 2022